Toward the end of the 19th century along the tree-lined North 24th Street with its fine middle and upper class homes of Kountze Place, Presbyterians decided to open Omaha’s first non-religious university. For 30 years, North Omaha was home to the eventual University of Nebraska at Omaha. This is a short history of the University of Omaha.

Starting a New Kind of University in Omaha

The first higher education institution in Nebraska was proposed for the town of Saratoga in 1863. It never came together though.

Omaha was just over 20 years old when its first higher education facility was opened. Before 1900, the city’s religiously affiliated universities and colleges were increasingly popular and successful. Creighton University, Omaha’s most famous higher education institution, was founded in 1878 by Catholics. Clarkson College began in 1888 and was started by the Episcopal church. The Nebraska Methodist College was started in 1891, and the Omaha Medical College was started as a private business in 1880.

It was into that reality that the Presbyterians decided the city needed a non-religious higher education institution. It was the staff of the Omaha Presbyterian Theological Seminary who decided in the early 20th century to start the new institution, first called the University of Omaha.

First discussed in the city’s media in 1891, the intention of opening the University of Omaha took more than 15 years to actualize. It was in 1908 when a group of faculty from the Seminary founded the University of Omaha. It was private, nonreligious and coed. Seeking to start a higher ed institution that was “free from ecclesiastical control,” they also wanted to ensure “sound learning and practical education.” They succeeded.

The site of the University was near North Omaha’s 1898 Trans-Mississippi Exposition. The Redick Mansion, which was built as a farmhouse in the 1860s and made into a mansion in the 1870s, predated the Expo. However, everything else on 15-acre site of the campus was built after UO was opened.

There were several buildings on the University of Omaha campus in North Omaha. Here are details about them.

The first building was the Redick Mansion, located at North 24th and Pratt Streets. It was renamed to be appropriate for the campus, and used for more than a decade for classes and other student activities. In 1917, Redick Hall was sold and moved to Minnesota. Learn more from my article called “A History of the Redick Mansion in North Omaha.”

Jacobs Gymnasium was built for the University in 1916. Jacobs Hall was a gymnasium facing North 24th Street, built with $14,000 from the sale of land donated by Lillian Maul. The building was named in honor of her deceased son, John C. Jacobs. Often called the John Jacobs Gym, the building featured a large room, as well as a viewing area on a balcony above the floor. The university hosted several sports teams, including basketball starting in 1910; football in 1911; baseball in 1913, and; women’s basketball in 1915.

Omaha University stopped using the building in 1937, leading to its second life explained below.

George Joslyn, a wealthy printer in Omaha, contributed a lot of his money to charities around Omaha. You know him from the home built for his wife Sarah, which we call the Joslyn Castle now. She contributed the money for the Joslyn Art Museum in memory of her husband after he died. However, when he was still young George donated $25,000 to Omaha University in 1915. The new building was designed by John and Alan McDonald and named Joslyn Hall in honor of its benefactor. It was finished in January 1917 and located immediately south of Redick Hall. With three stories and a basement, the building had thirty classrooms, an auditorium and a small library. Science labs, the music department and several other areas were originally located there. This building was repurposed when the university moved in 1937, as explained below.

Built in the first decade of the twentieth century, North Omaha’s Saratoga School went unused during World War I. Desperate for space, Omaha University started using the building as its science hall from 1917 to 1925. This building was demolished in 1937 when the University abandoned it.

In 1927, businessmen formed the North Omaha Activities Association in order to redevelop Saratoga School’s playing field into a football field for the University’s football team. New bleachers were built for a thousand spectators, and the Saratoga Field was home to OU’s football team until 1951. Then it was redeveloped, as explained below.

There were other buildings, too. The University of Omaha College of Commerce and Finance was located at 1307 Farnam Street, and the College of Law was at 1307 Farnam Street. They stayed in these places from from around 1918 until each of the colleges were consolidated at the present-day UNO campus in 1938. There were at least three other buildings on the North 24th and Evans campus (called the “U” Campus) as well.

In the early 1920s a proposed “magnificent campus” was slated for development between Florence Boulevard and North 25th Avenue. With twenty three buildings, the campus had two clusters of buildings. However, this campus was never built.

Instead of building the magnificent campus though, in 1931 the Omaha University president proposed to abandon North Omaha. He suggested building an entirely new facility in line with the major universities growing throughout the Midwest. Proposals included taking over Miller Park to the north, while a US Army board recommended selling Fort Omaha to the university, but neither of those passed. A group of civic leaders wanted to give an area of land near John A. Creighton Boulevard and Lake Street to the university, but that failed. In 1937, a new college president bought a dairy farm on West Dodge Road, and with the help of the Works Progress Administration and other federal and state assistance, the next year the university moved away from North Omaha forever.

There were several outcomes from the closure of Omaha University’s North Omaha campus. The population of the surrounding neighborhood was changing during the 1930s, and the closure of the university likely accelerated that process.

The Saratoga Science Hall was demolished as soon as the university was done with the building in 1937. The land became a used car lot for the bustling Saratoga neighborhood. The UO football field behind the Science Hall continued to hold competitions into 1951. That year, it was redeveloped as a commercial site for an A&P Grocery Store, which became a Hinky Dinky store. The grocery store closed around 1968, but the building still stands on the northeast corner of North 24th and Ames Avenue today.

In 1937, Joslyn Hall became known as the University Apartments. There were several 2-room apartments in the building, along with a laundry room and parking. During World War II they were marketed heavily to defense workers.

In 1938, UO leased the Jacobs Gym to the City of Omaha, which used funds from the Works Progress Administration to operate it as a community center. The gym and meeting rooms in it were made open to the public all day, with regular activities scheduled by the City of Omaha recreation department. Included at the center were classes on woodcraft, music, handcrafts, sewing, quilting, shopwork, art and dancing, each with seperate programs for children and adults. There was also volleyball, basketball, archery and other sports offered. A 1938 article said, “There will be regular classes in reducing for women,” which was either related to the Great Depression underway at that point, or a fitness program. By 1941, there were three basketball leagues playing in the facility, by then called the Main Recreation Center. The facility proved essential for flood relief by housing victims of the 1943 East Omaha flooding. When it was demolished, a time capsule in the cornerstone was opened to find a copy of the university’s charter and some newspapers inside.

By 1964, both the former Jacobs and Joslyn Halls were the last two original OU buildings left. Left abandoned by the City of Omaha for a decade, the buildings had been badly vandalized and the City did not want to maintain them. Both were demolished in June of that year. Over the next two years, the Evans Tower was built on the site and continues to stand there today.

If you like the photos you see in this article, go like at this awesome photoset by UNO’s Criss Library on Flickr. It’s a great collection and begins to hint at what life was like on the campus.

Finally, here’s a clipping of what the neighborhood is laid out like today for you to compare with the Magnificent Campus plan above.

Tour of the Omaha University Campus in North Omaha

Jacobs Gymnasium was built at 3624 North 24th Street in 1916. After the University moved in 1937, it became the WPA Gym and served as a public facility for a decade. The building was demolished in 1964. 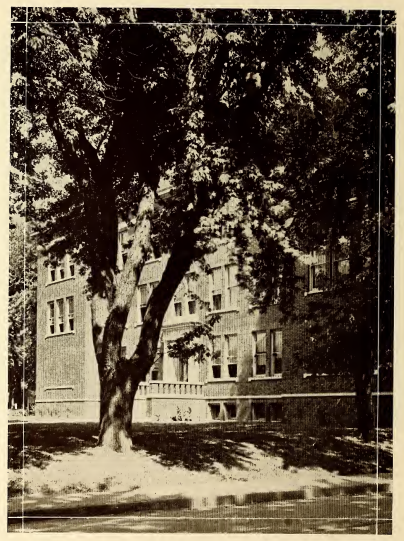 Joslyn Hall was built in 1916 at 3620 North 24th Street. Part of the original Omaha University campus, it was renamed the “University Apartments” when the University moved in 1937. It was demolished in 1964). 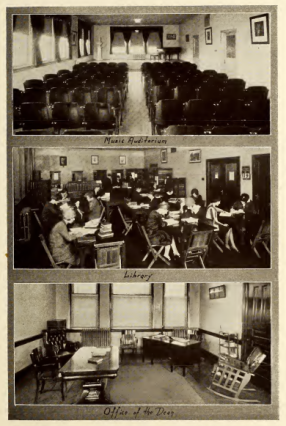 These are random pics from the University of Omaha campus in North Omaha. They include the Music Auditorium, Library and Office of the Dean, all located in Joslyn Hall.

These are pics from the original Omaha University campus in North Omaha. Pictured are the Saratoga Science Hall and two interior pics. 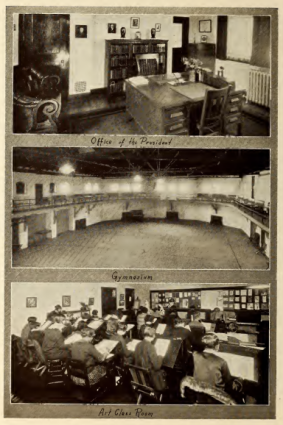 Campus life glows in these 1928 pics from the original Omaha University campus in North Omaha. This is the Office of the President, Gymnasium and Art Class Room.

Donate to the site here »

Donate to our podcast here »

Disclaimer: NorthOmahaHistory.com © 2008-2022 Adam Fletcher Sasse aka Adam F.C. Fletcher. All rights reserved. All images are copyright their respective owners. This website is an informational resource for private use only and is not affiliated with any organization. The information presented within these pages is accurate to the best of my knowledge but is based upon information provided by various sources, and Adam Fletcher Sasse takes no responsibility for any problems resulting from use of the material as presented within. The writing, graphics, art, podcasts, videos, and other content herein should not be reused in any form without permission. All graphics and images herein are scanned and/or generated by Adam Fletcher Sasse from original sources and also should not be used without permission.