The Miller Park in North Omaha has a long history. There is no single right way to write about it, and if, after you’re done reading this entire article, you disagree with the way I’ve written this history, I invite you to write your own version. 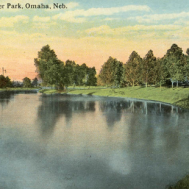 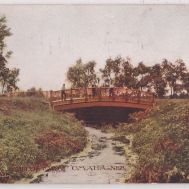 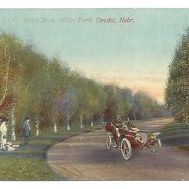 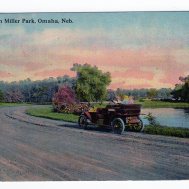 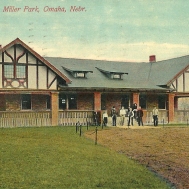 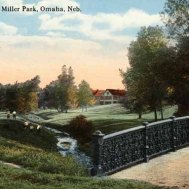 This is the Minne Lusa Creek flowing through Miller Park before 1914, when it was made into a pond.

To start with, it is important to understand that in the eyes of Dr. George Miller, the cornfield he kept in North Omaha was a perfect place for a vast city park. As a parks commissioner for the City of Omaha, he knew everyone would want to travel to the northern end of the Prettiest Mile Boulevard, finished in 1891, so he sold the land to the city.

George Miller was a pioneer Omaha doctor, and by the time he sold the land to the City for a park, he was already wealthy. One of the things that made him rich were his land investments. He’d bought an area south of the parkland to develop for houses. However, he knew the area would need some amenities, so he slyly played into the hand of the City.

The city liked this location because it had softly rolling hills covered with prairie grass, small farm plots and the occasional old Gophertown remanent. Gophertown was made of a little bunch of sod-covered hole homes built by a group of Irish immigrants who were jobless in the 1860s.

However, the Parker Tract wasn’t sold to them until Florence pioneer banker and farmer James M. Parker and his sons were done with it. The last of the old dugouts were blasted out when the City started building Miller Park in 1891.

In 1892, Miller Park was connected to the city by Omaha’s Prettiest Mile Boulevard, which eventually led from downtown Omaha to the park. That boulevard was part of a citywide system, which along with the park was designed by noted landscape architect H.W.S. Cleveland. By the 1900s, it was called Florence Boulevard, and became the first of three boulevards touching Miller Park. The neighborhood to the south was called Miller Park, too, and the one to the north would come to be called Minne Lusa.

In 1894, the City of Omaha Parks Board wanted make a lake in Miller Park fed by the Minne Lusa Creek. Contractors had started work, when City of Omaha Engineer Rosewater told Miller himself that, “the park board doesn’t want a lake there.”

Why did he lie? Well, it seems that at the same time the Parks Board was negotiating for the park and seeking out contracts to build a lake, Rosewater was engaged in constructing the “big North Omaha sewer” which drained the largest sewer area in the city, connecting to Minne Lusa Creek. Any resulting lake would really be a sewage pond.

In 1902, the Park Board installed two beautiful bridges from the 1898 Trans-Mississippi Exposition to cross the open sewer creek. In 1905, the Parks Board got their lake by running fresh water into the park, separate from the Minne Lusa Creek.

Less than a decade later in 1913, neighbors started complaining that the open sewer was a nuisance and demanded something be done.
In 1915, the City of Omaha built a twelve foot wide storm sewer through Miller Park, disconnecting the city’s flow from Minne Lusa Creek. Around the same time, they capped the creek and made the Minne Lusa Boulevard median. Just 16 years after exposition, the bridges were buried in place. No remnants of them are known to exist today.

Called the “pride of North Omaha” in a 1916 history of the city, Miller Park was said to “exemplif[y] most strikingly the transformation which time and money art the art of the landscape gardner can make.”

Miller Park was designed by a popular landscape architect named H. W. W. Cleveland. At 78 acres, a softly-rounded lagoon fed by natural springs and the Minne Lusa Creek was installed just after the turn of the century. A notable pavilion was built in 1908 along with pathways and bridges throughout the park, while a gentle road criss-crossed the park. Throughout the first half of the 20th century, many lovely nights were lit by fireflies for lovers walking hand-in-hand through birch and cottonwood trees.

The park’s Birch Drive was well-reputed for its romantic, gently sloping pathway. Early on, it excitedly connected with Belvedre Boulevard, eventually taking drives to the Forest Lawn Cemetery in what the landscape architect Cleveland saw as a connection to the city’s parks and boulevard plan. Miller Park’s golf course, opened in 1916, is still in use today.

Miller’s investment continued to payoff in the years following, and his namesake neighborhood was well on its way to filling in by the time he died in 1920.

The park’s beautiful birch and cottonwood trees lined the drives throughout the park. There is more than one newspaper account of calm, easy strolls through the park, under the trees and among the fireflies at night. Driving was a pleasure on the crushed rock driveways, later replaced by hard surface tar roads.

Between 1900 and 1950, the park was irrevocably attached to the Prettiest Mile Club, later called the Birchwood Club. The Miller Park neighborhood and the Minne Lusa neighborhood, as well as the Florence Boulevard neighborhood all used the park for social activities.

Every winter for almost 50 years, the Miller Park pond was the sight of a Winter Carnival featuring figure skating, ice ballet, and other feats of endurance and finesse.

The first Miller Park pool was opened in 1950 to serve the neighborhood.

After several years of informal, but strictly enforced the de facto segregation of Omaha swimming pools, the Omaha Police Department became involved in ensuring the Miller Park pool was open to African Americans by the mid-1960s. The photos here of that era show a regular police patrolman ensuring Blacks are allowed to swim at the Miller Park pool.

Unlike what many white people think of we try to envision segregation, there weren’t lines of African American children standing outside the fence looking into the Miller Park pool, or a Black section to swim in once they got there. However, historic accounts by and from African Americans in Omaha show they were made to know they couldn’t swim at the pools in North Omaha, including Miller Park, High Point, the Birchwood Club and others. The Peony Park swimming pool was de facto segregated until 1962. The City of Omaha supported this segregation, too, by building a pool at Kellom Park that kept African Americans “in their neighborhood”, including Blacks who lived as far north as Miller Park.

By the point the above photos were taken in 1968, white flight was in full force and the nearby neighborhoods were beginning to be vacated by white people. As the photo above shows, the pool became increasingly unpopular among whites who refused to swim with African Americans. South of the park, white people were moving out of the Kountze Place neighborhood en masse, and Saratoga began emptying out when African Americans moved in. By 1985, whites were moving out of the Miller Park neighborhood, and by 1995, they began moving from Minne Lusa en masse, too.

Today, Miller Park is still home to many beautiful amenities. The pavilion stands tall, and the golf course celebrated its 100 year anniversary recently. There are still trees throughout the park, and the hills roll slowly between North 30th and North 24th Streets.

In recent years, the park has gained a horrendous reputation in the public eye. Sometimes called “Killa Park” by some neighborhood youth and adults in other parts of the city, Miller Park needs a public relations campaign.

There’s always room to grow. The Minne Lusa-Miller Park Neighborhood Association is claiming the park actively and working to grow it, and neighboring institutions are doing the same. The future is still ahead, and the door has not closed on Miller Park. Let’s wait and see what’s ahead!

3 replies on “A History of North Omaha’s Miller Park”

I was at the swimming pool in 1954 when the park opened swimming to blacks with the white privileged. All the whites got out of the pool and as far as I know…. never went back in and really never came back.

Thanks for being honest John – that seems to be a selective trait in some peoples’ memories.

My sisters, my boy friend, our friends and I swam for years at Miller Park with kids and teenagers of all ages,races and ethnic backgrounds. I last swam there the summer of 1959 just before I started high school. We also swam at Peony Park alot. All great memories. I am now 73.

NorthOmahaHistory.com is a personal project to research, write and share the people, places and events that made North Omaha, Nebraska a great place. To learn more, contact me! All content © 2019 Adam Fletcher Sasse. All rights reserved.