Omaha was founded on white supremacy. Since then, both formal and informal forces throughout the city have worked continuously to impose, maintain and expand white supremacy throughout the city, state and nation. The stories of Mondo we Langa and Ed Poindexter are examples of what that looks like. Understood in the context of North Omaha history, it is easy to see they aren’t the only examples; however, they are among the most powerful.

The Context of North Omaha

The Civil Rights movement has been active in Omaha since the 1920s, when activists, politicians and community leaders called for African Americans to be granted full human rights. At the hands of the DePorres Club and 4CL, the movement surged forward in the 1940s, 50s and 60s, against A LOT of barriers.

By the mid-1960s though, the national Civil Rights movement was stagnating. In North Omaha, there was a lot of righteous indignation growing. In the dead of summer in 1966, a group of younger people at 24th and Lake supposedly began smashing and looting local businesses, and rioting continued until the National Guard was called in. This happened again in 1968, and twice in 1969. The biggest riots in North Omaha history were in August of 1969, when an Omaha police officer killed a young girl in the Logan Fontenelle Projects, aka Little Vietnam. Simultaneously, groups like BANTU and individuals like Ernie Chambers were standing up to fill the vacuum of leadership created in the absence of an effective, ongoing Civil Rights movement.

To middle class white Omahans, it seemed hell was breaking loose in their city. The Omaha World-Herald and local TV stations were salaciously promoting negative perceptions of North Omaha, pushing white flight like real estate pimps. The city’s leaders, who were all wealthy white men, became anxious to show they could control the city’s Black population and maintain white supremacy.

The National Committee to Combat Fascism was an Omaha group led by David Rice and Ed Poindexter, which succeeded the local chapter of the Black Panthers Party in the late 1960s. They were organizing legal, political activities to protest police brutality racism, expose North Omaha slumlords, run tutoring programs, and provide food to families in need.

On a hot day in August 1970, a suitcase packed with dynamite exploded in a vacant house near North 28th and Ohio Streets in North Omaha. Two Omaha police officers were inspecting the house at the time, and one died. A youth named Duane Peak was quickly arrested, and under force from the Omaha Police Department, he said six others were involved, too. Eventually, 17 people were arrested in connection to the bombing.

Five people were eventually sought by the Omaha Police Department in connection to the murder of officer Larry Minard. They were Robert E. Cecil, Duane Peak, Ed Poindexter, Eddie Bolden and David Rice. 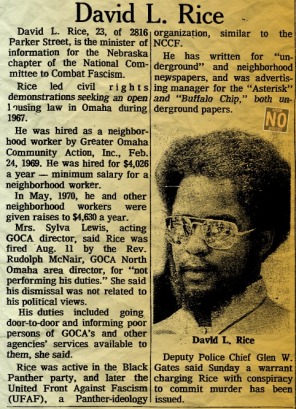 In August 1970, David L. Rice was one of five men accused of being involved in a bombing that killed Officer Larry Minard of the Omaha Police Department. 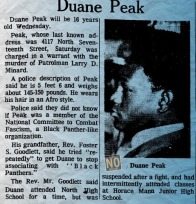 In August 1970, Duane Peak was one of five men accused of being involved in a bombing that killed Officer Larry Minard of the Omaha Police Department. 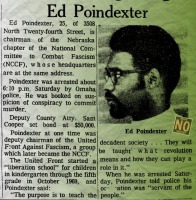 In August 1970, Ed Poindexter was one of five men accused of being involved in a bombing that killed Officer Larry Minard of the Omaha Police Department. 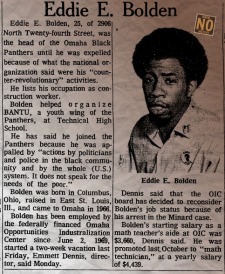 In August 1970, Eddie L. Bolden was one of five men accused of being involved in a bombing that killed Officer Larry Minard of the Omaha Police Department. 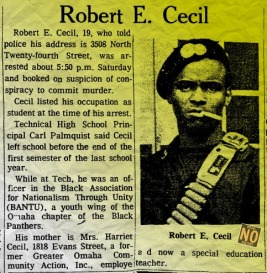 In August 1970, Robert E. Cecil was one of five men accused of being involved in a bombing that killed Officer Larry Minard of the Omaha Police Department.

All of these men presented alibis that were initially accepted by the police. However, Duane Peak pointed the finger at Rice and Poindexter, and almost two weeks after the explosion they were arrested for the murder of Omaha police officer David Minard. Although they were not originally accused by Duane Peek, the cards were stacked against them.

In the late 1960s, FBI director J. Edgar Hoover became obsessed with stopping the Black Panther Party from existing. Under his direction, the FBI started a program specifically designed to disrupt and “neutralize” organizations characterized as “Black nationalist hate groups.”

To do this, the FBI’s field offices launched local efforts across the country, including Omaha. Their agents became actively involved in Omaha’s Black Panther Party, and when the explosion happened, they were well-positioned to point the finger at local Panther leaders.

In July 1970, the Bureau of Alcohol, Tobacco and Firearms took a statement from a 12-year-old girl named Marialice Clark, and used it to get a warrant to search the National Committee to Combat Fascism (NCCF) headquarters. At this time, David Rice was Deputy Minister of Information for the NCCF.

Police also arrested a former Black Panther named Raleigh House for supplying the dynamite. However, he was never charged formally and only spent one night in jail before being released. According to FBI files released in the 2000s, that was because the police wanted to claim Langa supplied the dynamite.

In the days and weeks after the bombing, a community activist named Ernie Chambers held several public meetings on his own. During the meetings, he questioned the police investigation which zeroed in on the Black Panthers.

In 1971, David Rice and Ed Poindexter went on trial for murder and were convicted. During the trial, the Omaha Police Department continually received permission to withhold evidence, and with the FBI program under wraps, its agents couldn’t be called to court.

In 1974, a retrial was denied by the Nebraska State Supreme Court.

Mondo died in prison in 2016. Poindexter is still serving time in his conviction, 46 years later.

Since the original trial, the Nebraska Board of Pardons has continuously denied pardon hearings. Composed of the governor, attorney general and secretary of state, this is a politically-motivated panel with the sole authority to commute a prison sentence. Raleigh House has not been found again since the original trial. According to Leo Adam Biga, Duane Peak lives under an assumed name in a different state. The young girl quoted in the affidavit, Marialice Clark, went missing in 1972 and was never found.

In 1990, Nebraska State Senator Ernie Chambers traveled to Spokane, Washington, to interview Duane Peak regarding the case. At the time, Peak was locked up in the state penitentiary. Peak didn’t provide anything new, except a voice recording that was used to analyze the possibility it was him who placed the 911 call on the day of the bombing. An international expert said it wasn’t, which contradicts the prosecution’s case against Poindexter and we Langa.

Mondo we Langa died this year (2016) in prison. Ed Poindexter is still there, 46 years after his indictment. A lot of people have asked for new trials, pardons, and everything in between. Carter Van Pelt, Nebraska Senator Ernie Chambers, Former Nebraska Governor Frank Morrison, Tariq Al-Amin and Mary Dickinson penned a powerful letter calling for justice.

Several complete histories of the case have been written, and few land on we Langa or Poindexter being guilty. Instead, they regularly reiterate the words of Jack Swanson, a retired detective who worked the case at the Omaha Police Department, who told the BBC,

“We feel we got the two main players in Rice and Poindexter. And I think we did the right thing at the time, because the Black Panther Party, or whatever name it was going by at the time of the murder, completely disappeared from the city of Omaha.”

I think that shows the real reason why this travesty of justice happened, and yet another reason why North Omaha still distrusts the Omaha Police Department today: History doesn’t die.